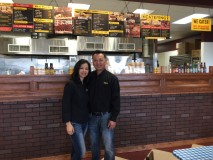 At age 10, Chad Manivanh, his parents and his six siblings moved from Laos to America. They came to pursue the American Dream, knowing very little English.

After settling in California, Chad’s parents worked several jobs to support their family, and the principle of working hard to achieve success stuck with Chad throughout his life. After graduating high school, he was able to attend college at Brigham Young University, which launched him into a long-term business career.

Chad worked hard as a retail manager and eventually moved to the real estate business. Prior to attending college, Chad spent two years in Dallas where he tasted his first Dickey’s meal. He fell in love with the slow-smoked flavor and home-style sides. Eventually settling in Washington with his wife and children, he decided it was time to own his own business.

Chad is now living the American Dream in the town of Everett, where he is very involved in his community and caters all types of events. He recently donated a back-to-school catering for local teachers, and regularly connects with event venues using community marketing tools. He also caters Special Olympics events. One of Chad’s favorite tricks is to turn box-lunch caterings into full-service out of good will. As a result, he has school sports teams coming to his store from Canada to Portland. With catering at 27%, Chad is certainly doing something right.