In North Carolina, the citizens know great barbecue. So when former CPA Fran Noel decided to open a restaurant, Dickey’s Barbecue Pit was an obvious choice. Fran and her business partner Dorothy Elias researched several concepts before making a decision. In addition to great barbecue, Dickey’s low franchise fees and helpful approach toward future franchisees sealed the deal. Their first store opened in Asheville in 2012, followed by the second store in Canton in 2014.

With November catering numbers at 32 percent, Fran is proof that community marketing works. “The Community Marketing training videos distributed by the home office have inspired us to get out in the van and go into our communities, which has worked for us to seal some great catering deals. I enjoy interacting with people and the suggested activities make it possible to meet people and build sales at the same time.” Fran’s team recently delivered an XL Family Pack to a big box retailer, and got three big caterings over Thanksgiving weekend as a result.

Both stores are also active in “Rib Raisers”, Dickey’s fundraising program for schools and community events. Fran provided lunch for the March of Dimes in Canton and Asheville and also helps with the Toys for Tots Tractor Run in both communities.

In addition to all her community marketing and charitable activities, Fran builds her local brand presence through competitions. She won ‘Top Hog’ at Bacon Fest in 2013 and the People’s Choice Award at the Western Carolina Barbecue Festival last summer. Congratulations to this week’s Brand Champion! 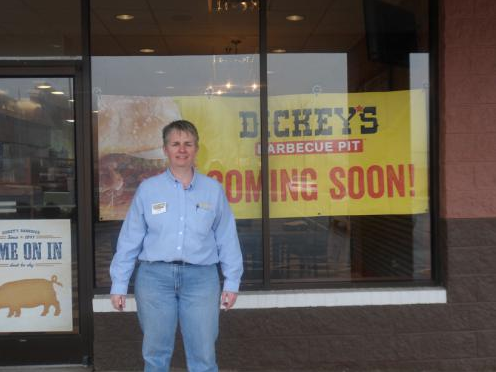