Everything You Need to Know about Texas Toast

While none may know the true inventors or origins, Texas toast is a beloved snack and side that has adorned many a plate of barbequed goodies since the late 1940s.
Texas toast is simply thick-cut toasted bread sliced at double the normal thickness. It’s prepared by lathering butter on both sides and then grilling until both sides are golden brown. Cheese and garlic are often added to serve Texas toast bread and it is regarded as one of the main comfort foods of choice for many native Texans.
Craving Texas Toast Right Now!?
Order up this amazing side along with your favorite BBQ food!
Order Now

The Contested History of Texas Toast

One possible inventor of Texas toast claims to be Kirby’s Pig Stand in Denton, Texas. Also claiming to be the original home of the onion ring, Kirby’s Pig Stand claims that they invented it when they received an order from a bakery of toast that was deemed too thick to cook. So the resident cook, Wiley W. W. Cross suggested layering them with butter and grilling them instead.
Another claimant to the Texas toast throne is a different Pig Stand location from Beaumont, Texas where the cook there claims to have created the signature side rather than W.W. Cross.
Either way, one thing that is certain is that the only state claiming to have invented the toast is the very namesake from which the toast arises.

What Kind of Bread is Texas Toast?

Texas toast is most often made from packaged bread, although nowadays it can also be bought pre-buttered from your local supermarket. Possessing the characteristic extra thickness, the thicker slices lend themselves to be used in grilled cheese sandwiches or chicken fried steak sandwiches. 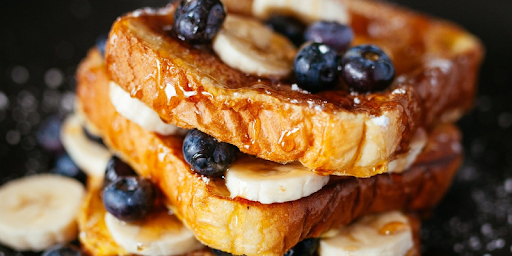 What is Texas French Toast?

Quite simply, Texas French toast is exactly what it sounds like, French toast that has been made using the extra thick slices endemic to Texas toast.
Since the cut of bread is so thick, it allows for greater absorption of the egg and cream mixture and longer frying times. All of this contributes to a denser, crisper and more flavorful twist on the French toast recipe.

Where to get the best Texas Toast today?

Of course cooking at home with friends and family is always great, but if you truly want the best Texas Toast - and no mess to contend with - then you’ll want to come down to your local Dickeys BBQ Pit.
We take Texas Toast seriously, because we take barbeque seriously. Click here to find a Dickeys location near you, and try Texas Toast like it was meant to be.