one of three markets in the U.S. where Chick-fil-A is offering new family-style meals.<o:p></o:p>

The national fast-casual chain hopes to meet the needs of busy families getting even busier as the school year starts. The family-style meals ($29.99) serve four people with choice of entree (such as 12-count Chick-n-Strips), two sides (such as mac and cheese and bacon baked beans), plus rolls and drinks.

Too busy or too tired to cook? Here are 10 more restaurants around the Valley where you can pick up a family meal to go with healthy options starting at $20 for four people.

Family chicken dinners for four include eight to 10 pieces of marinated and grilled chicken; two sides such as corn, beans or mashed potatoes; plus flour or corn tortillas and salsa ($20.99-$25.99).

The family pack features 24 to 100 wing pieces ($27.99-$98.99) in classic, boneless or mix-and-match varieties. Choose the flavors, such as mango habanero and lemon pepper; the sides, such as fries and baked beans; and dips, such as ranch and honey mustard. All packs come with carrots and celery sticks. Add one roll for 59 cents, six for $2.89 or a dozen for $4.99.

The family meal for four ($29.96) includes protein such as rotisserie chicken or turkey breast; four sides, such as mashed potatoes and sweet corn; and four pieces of cornbread.

Zoe's Kitchen offers family meals to go and they come

The Mediterranean family meal for four ($39.99) features choice of chicken or veggie kabobs, grilled chicken, chicken orzo pomodorina or chicken or spinach roll-ups. They come with two sides, plus a Greek salad, hummus and pita bread.

The six pack ($44.95) serves four to six with choice of two meats (1 pound each), such as ham, Polish sausage, pork ribs brisket and chicken; and three sides, such as fried okra, dill potato salad and waffle-iron fries. The package includes six rolls and barbecue sauce.

The Lalibela Exclusive for four ($56.95) is loaded with traditional Ethiopian favorites, including spicy chicken stew, collard greens and savory lentils. A vegetarian version ($51.95) also is available. Both come with salad and injera, the spongy flatbread made out of teff flour. 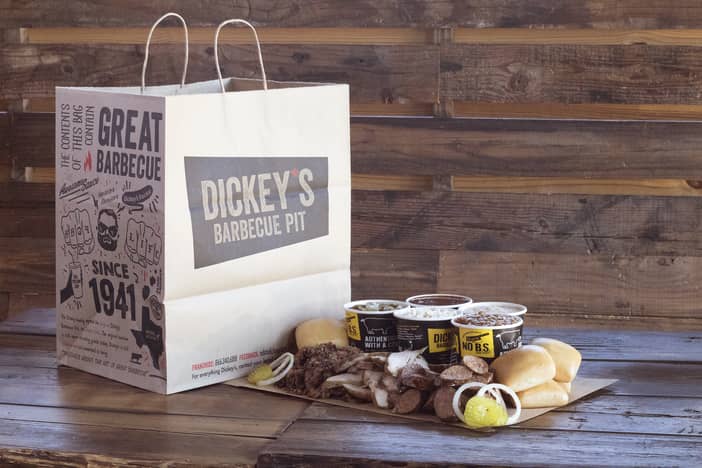