North Auburn’s growing Highway 49 business strip will have some Texas barbecue flavor to add to its expanding restaurant roster with the opening of Dickey’s Barbecue Pit.

The Dickey’s signs are now up on one of two new buildings at the Willow Creek Plaza, adjacent to Home Depot.

Dickey’s is a privately owned chain of more than 500 franchises. Its head office is in Dallas and it’s been in business since 1941. It’s the largest barbecue chain in the United States.

“We are excited to confirm that Dickey’s Barbecue Pit is scheduled to open in Auburn on or around February 25,” Dickey’s Public Relations Director Kimberly Harms said Monday in an e-mail message.

The Dickey’s website states that California is second only to Texas in the number of Dickey’s restaurants.

Georgetown’s Jerry Rose hadn’t noticed the new Dickey’s sign that had gone up on the side of a building opposite the recently opened Smart & Final Extra grocery store at the Highway 49-Willow Creek Drive crossroads in North Auburn.

Rose said his eatery of choice when he visits Auburn to shop is the Sierra Grill Smokehouse nearby and the idea of barbecue at Dickey’s was a new one.

“I haven’t heard of them,” Rose said. “This is the first time I’ve been here. They’re sure building this place up.”

As well as Dickey’s the Willow Creek Plaza and Rock Creek Plaza across Highway 49 will soon also have openings for Chipotle, Panda Express, Panera Bread and Chick-fil-A. 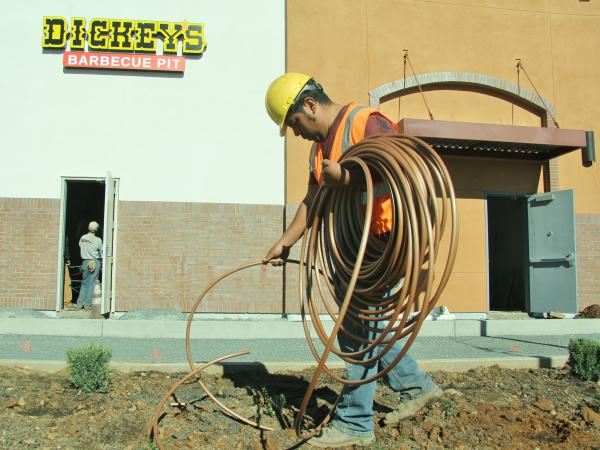