Detective Justin Ellis has had to rely on others for transportation since a crash last year left him paralyzed, but a special car donated to him Thursday will let him zip around town on his own.

As vice president of the Dallas Transit Police Association, Ellis said he’s used to caring for others. A chief told him now it’s his turn to receive help, and the Dallas Area Rapid Transit Police detective said he’s grateful to get it. Ellis and his wife, Rachel, were presented with a gleaming new silver Toyota Camry outside DART Police headquarters in East Oak Cliff on Thursday morning.

“You’ve given me more independence to be back to where I was before my wreck and that actually means a great deal to me,” Ellis said. “To get out and just drive and go do something on my own without having to be dependent on other people.”

Ellis was on a motorcycle patrolling near the State Fair of Texas last October when a driver ran a red light and struck him, breaking his pelvis, a foot and some toes.

Once he came out of a coma and returned home, Rachel and his brothers and sisters in blue began to drive him everywhere he needed to go.

The family had a rental van with a wheelchair ramp until workers’ compensation stopped paying for it. Then, the Assist the Officer Foundation and The Russ Martin Show covered another rental, Rachel said.

“It wasn’t a shock to see them rally,” she said of their law enforcement family. “It was more shocking to see them financially surround us. It was overwhelming and unexpected.”

But in order to drive himself, to really reclaim his independence, Ellis needed a wheelchair-accessible sedan with hand controls.

That’s where the community came in again: Toyota of Rockwall; Dickey’s Barbecue Pit; the Barbecue, Boots & Badges foundation; AOF and The Russ Martin Show raised the money to buy him a customized car.

Several leaders from the organizations praised Ellis as they handed over the keys.

"I look up to you because of what you do," said Charles Pankey, general manager of Toyota of Rockwall. "So, thank you for what you do." 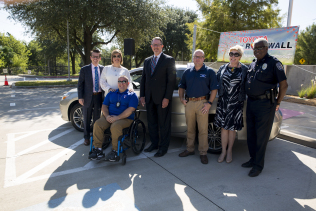