MOUNT PLEASANT — This village’s newest restaurant will be closed every night, but it won’t be inactive.

Each night, the next day’s meats will be slowly smoking at Dickey’s Barbecue Pit which is set to open today, Dec. 10, at 6012 Washington Ave.

The Dallas chain’s first restaurant in the Racine area is also the first of three businesses to open at the newly built Pleasant Pointe Commons, developed by Northterra Real Estate Group. Still to come are Firehouse Subs and Polished Beauty Bar.

This is the third Dickey’s franchise for Larry Visk of Salem, who was previously a military contractor, a food service inspector, for six years in Afghanistan.

“I didn’t want to come home after six years and do the same thing,” he said.

Dickey’s has about 530 restaurants across the country, and every one smokes its meats on site.

On Monday, Visk showed the fresh pork butts, beef briskets and other meats awaiting their turn in the gas-fired, hickory-wood smoker.

“We don’t want the whole cow — just the brisket,” Visk remarked. “It’s the toughest, meanest part of the cow.”

But at 6 to 7 p.m. each evening, the briskets go into the smoker, which is kept at 225 degrees at night and 275 degrees during the day.

After 14 to 16 hours in the smoker, and with the spice rub, the fibers break down to create a tender, moist barbecue meat.

At Dickey’s, diners walk up to the meat block, choose their meats and watch them sliced before their eyes.

The two basic meat choices are plates and sandwiches. A meat plate, including two side orders, roll, pickles and onions, ranges from $11.25 for one meat to $13.75 for three. A quarter plate, for $9.50, is another option. All meats are the same price.

There are three Texas-style sauces: spicy, sweet and original. “The original has a kick,” Visk said. “Spicy is really spicy.”

The 12 side orders include the most popular, Mac & Cheese; dill potato salad, Caesar salad and creamed spinach.

At Dickey’s, customers help themselves to free soft-serve ice cream. All meats can be bought whole or sliced by the pound, as can side orders. Dickey’s also does catering as boxed lunches, delivery buffet or full service. 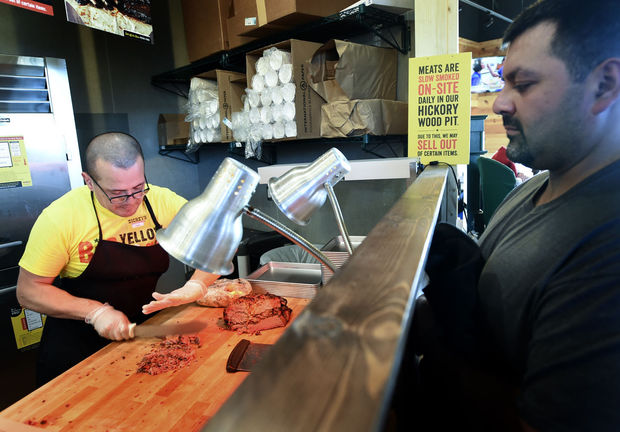