FastCasual's editorial team has released its annual list of the industry's most significant brands and executives, awarding Dickey's Barbecue Pit the coveted No. 1 spot.

The 2016 Fast Casual Top 100 Movers & Shakers publication is now available for download and comes after Sunday's awards gala in Chicago honoring the 75 brands and 25 executives named to this year's list.

"As the popularity of fast casual brands increases so does the number of emerging concepts, accompanied by a multitude of QSR and full-service franchises that are now rebranding in an effort to join our exclusive club," said Cherryh Cansler, managing editor of FastCasual.com. "To help narrow down the choices this year, we accepted self nominations, requiring each brand to answer a variety of questions about their businesses."

The info helped judges whittle down the hundreds of nominations to 75 brands and 25 executives to round out the final Top 100, Cansler said. Judges not only rated brands on growth and sales, but considered innovation across several categories, including technology, design, customer experience, sustainability and menu offerings.

"The top spot unanimously went to Dickey's Barbecue Pit for not only its impressive growth performance (a 19 percent year-over-year growth rate with nearly 550 units and plans to open 100 this year), but also because it is a leader when it comes to implementing technology to enhance the guest experience," Cansler said.

The gala and the Top 100 report were sponsored by Taylor. 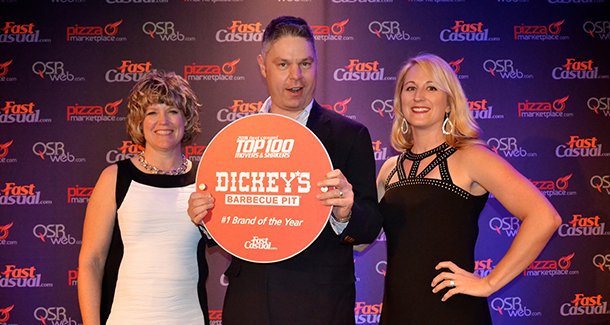