In the South, barbecue is not hard to come by, and we are grateful for it. A franchise that got its start in the barbecue-famous state of Texas has landed in the streets of North Myrtle Beach, making for the second Dickey’s barbecue Pit location in the Grand Strand.

Now at home in the steadily growing Coastal North Town Center, Dickey’s offers meats that are slow cooked on a daily basis, even though that means they may run out of items before they close shop by the end of the day. Naturally, no barbecue pit is complete without pulled pork and brisket, but Dickey’s also has honey ham and Polish sausage. Turkey and chicken breasts are also available for those not fond of red meat.

In case any guests had doubts about the joints origins, the walls are slats of wood and the “chandeliers” are wagon wheels, all adding to a Texas-like rustic atmosphere. Being a barbecue place, fancy is not what you should expect, but that doesn’t mean it isn’t charming and clean.

Obviously, Dickey’s isn’t a place that will be frequented by vegetarians, though there are a few salads and baked potatoes. The main attraction is all the meat, which can be made into a quarter plate for $7.95, or up to a three-meat plate for $12. These plates come with a roll and two sides, of which there are 12 to choose from.

BARBECUE IS THE NAME OF THE GAME AT DICKEY’S, AND THERE’S PLENTY OF SOUTHERN GOODNESS TO LOVE.

The meats are slow cooked and were tender and savory. Dickey’s provides their own sauce, mild or spicy, but even the mild has a nice kick. Some customers might find their meat tasteful enough even without barbecue sauce, like the Polish sausage which was fiery on its own.

The many sides are more Southern favorites, like beans, coleslaw, potato salad, and fried okra, and are cooked to order.

The fried goodies, like the okra and onion “tanglers”, are freshly made and very tasty. The baked potato casserole was seasoned perfectly and the mac and cheese was extra cheesy.

Dickey’s is a great option for large groups and catering, with meat sold by the pound and half pound, plus different choices for events, like a buffet or boxed lunches. Sides can also be prepared for a party, with the largest size able to feed around 20 to 25 people.

Barbecue is the name of the game at Dickey’s, and there’s plenty of Southern goodness to love.

This Texan company works to provide as much variety as possible as well, without skimping out on the quality of their main attraction. Drop by once and you might get lassoed into coming back again and again. 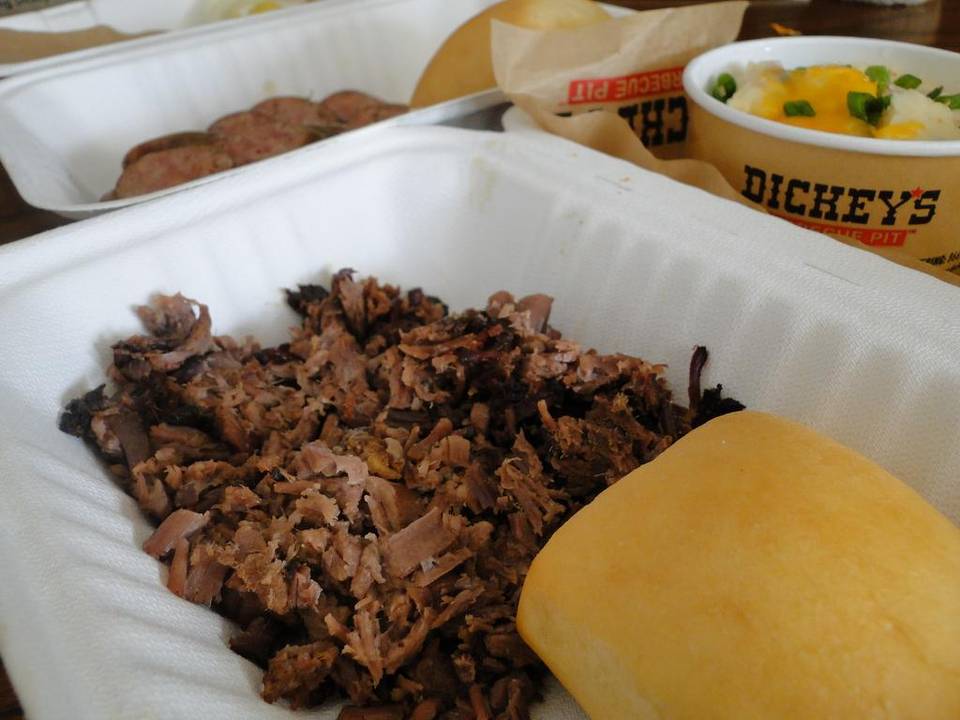