Dickey's Shines on Dothan's East Side

The Dothan Eagle published this review of the Dickey's Barbecue Pit location in Dothan.

Many know a plethora of restaurants find a home in Dothan, but a disparity exists between which sides of the city you can find them.

Eateries – as well as neighborhoods and stores – are more densely concentrated on the northern and western sides of town. That means people like me who live on the southern and eastern sides often have to travel 10 to 20 minutes (in heavy traffic) to dine at our favorite spots.

Dickey’s Barbecue Pit, located near Southeast Alabama Medical Center, could change that after three friends and I had a pleasurable experience there recently.

I met my friends Bryan, Ryan and Meredith after church one Sunday since all four of us either live or attend church on that side of Dothan. Ryan has visited the establishment before, while Bryan, Meredith and I were newcomers.

I followed with an intriguing order – The Westerner ($6.49) – a beef brisket sandwich topped with a Polish kielbasa and cheddar. I paired it with a side of baked potato casserole ($2.25) and a large sweet tea ($2.50).

Meredith ordered the giant baker ($7.95), a barbecue baked potato that she topped with pulled pork. The baked potato usually comes with cheddar, sour cream and green onions, but Meredith asked for those items to be removed.

Ryan thought the smoked chicken provided good flavor, especially with the hint of Italian seasoning. The breast was lean and juicy but could have used more smokiness, he said.

Ryan absolutely adored the jalapeno and cheese sausage, though.

The entrée possessed the right balance of peppers, cheese and meat with each element complementing the other. He added the sausage was smoked to perfection, and after sampling a bit, I can concur.

While it sounds like an odd combination, the brisket and kielbasa on my sandwich worked well. The melted cheddar really melded the sandwich together, and by the time I added a touch of Dickey’s spicy barbecue sauce on top, I had an awesome sandwich.

I also highly recommend the baked potato casserole, which had a heart-warming and creamy blend of potato and cheese.

The elements of Bryan’s Beefy Mac dish, by themselves, were very good, he said. He noted the macaroni and cheese contained rich flavor and had great consistency, and a sweet barbecue sauce he added to the brisket really accentuated the meat.

However, the dish comes to the customer with a pile of brisket resting on top of the macaroni and cheese. Bryan said the brisket dominated the dish in this format, which is why he separated the two elements.

Meredith had no qualms with her selection. She noted she did not have to add salt to her potato, and the pulled pork mixed perfectly with the potato.

She added the sweet barbecue sauce was the best she has eaten in awhile – not overpowering with the right proportion of kick. In a show of how different palates can be, Ryan disapproved of the sweet sauce while noting the original sauce had a great blend of spices. On the other hand, the spicy was my favorite, although it is not for the faint of heart.

Since Meredith had never been to Dickey’s, she found the ordering system a bit confusing, and I agree. You actually place your order with the people cutting the meats on one side of the lunch counter then pay at the cash register at the other end.

The format is common to sandwich shops and a certain higher-end quick-service Tex-Mex chain, but I have only seen it once (in Texas) at a barbecue restaurant. Some signage would improve this aspect.

Other than that, the food was promptly served and the staff courteous. There is not too much interaction given it is a lunch-counter style establishment.

The aged-wood motif fits the cuisine you would expect a Southern-style barbecue restaurant to possess. Some of the walls are built to resemble a blackboard, and drawings fitting for a barbecue place adorn them.

Although the lighting can be a bit low for some people’s taste, I had no issues with it. The layout communicates a proper theme for the cuisine. 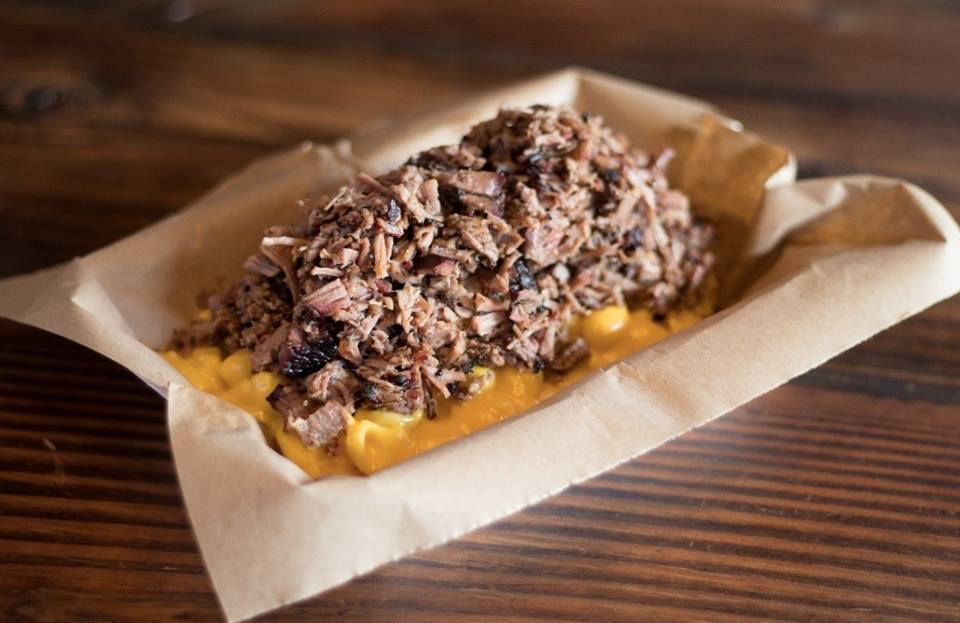