Dickey's Barbecue Pit is celebrating its 75th anniversary by asking artists to submit works for two large-scale murals that will become permanent features outside Dickey's original location in Dallas. The selected artists will win free barbecue for a year and $500, according to the release.

"Dickey's Barbecue Pit is an artisan brand, and we are proud to commission new works of art to feature prominently at our first and original location," Roland Dickey Jr., CEO of Dickey's Barbecue Restaurants, said in the release. "The mural project will be a lasting symbol of Dickey's 75 years of serving authentic, Texas-style barbecue, and we look forward to many more years of serving communities around the nation and the world."

All submissions will be accepted until Nov. 24, according to the release. 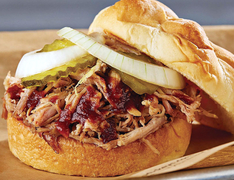