Dickey’s CEO Roland Dickey Jr. has a strong personal style—energetic, sharp-tongued and confident that he’s helping to build “the greatest brand ever.” Contrary to his brash ways, he’s unwilling to pat himself on the back or take a victory lap for fear of losing the brand’s momentum. As last year’s No. 6 Fast & Serious brand, Dickey’s Barbecue Pit remains firmly on the gas with a new butcher shop motif and a heavy investment in technology, including data analytics, loyalty, delivery and a new point of sale system.

Like Domino’s has been, Dickey wants his brand to be known for its technological know-how in the coming years. Dickey’s has morphed into a more fast-casual-style brand, focused on improving its carbon footprint and steadily removing less desirable ingredients from its food. “People want to know the origins of the ingredients, and want to know it’s high quality,” Dickey said. “Our philosophy is, we don’t want to serve what we think people want, we want to serve what we like and what we want—and fortunately a lot of people agree with us.” After working on beefing up its internal infrastructure, he added 2017 is the year Dickey’s goes international, which should impact its future growth in a big way. “We don’t want to do anything to scratch our ego, so we wanted to lay a really solid foundation domestically,” he said. “We have all kinds of interest, especially from Central and South America and Asia—people are blowing us up.”

Within the U.S. or abroad, Dickey has a razor-sharp focus on keeping the brand fresh on a successive basis, while simultaneously appealing to its “legacy” and younger customers. “This isn’t your grandfather’s barbecue,” he said. “All generations want to be part of something cool and happening and fun and growing.” 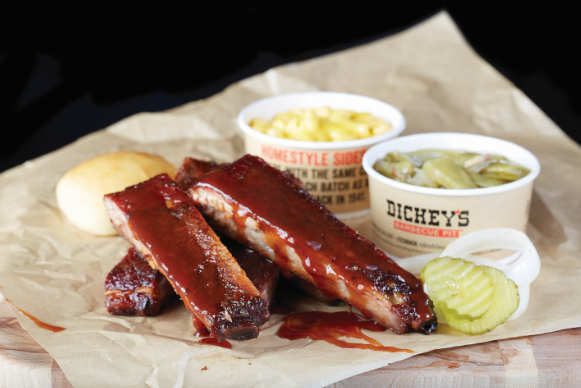