The Morning Call covered the slated opening of the Dickey's Barbecue Pit location in Palmer Township.

According to a news release from Lehigh Financial Group, which helped the couple arrange financing for the operation, Adobo will offer authentic Hispanic and Spanish food.

The Pinargotes, who have a Puerto Rican background, are aiming to attract a diverse clientele interested in "authentic Puerto Rican comfort food" in a friendly environment.

"Our menus will be in English with Spanish translations and we designed the place for a fast, casual-dining experience," said Jose Pinargote, who is a co-owner of Pints & Pies, a pub on Northampton Street in Wilson.

Mostly cosmetic renovations will include new white subway tile on the walls and wood veneer flooring.

Lynch of Bangor also plans to designate a carry-out parking area where patrons can park their vehicles to easily pick up online orders.

“Out here, on the East Coast, everybody and their brother does pulled pork,” Lynch said. “Beef brisket is a Texas specialty that you can mess up pretty easily.”

The 72-seat Palmer spot also will offer some menu items not found at all Dickey’s restaurants.

Unique finds will include Fancy Pork and Racetrack sandwiches, as well as a Smokestacks dish, or macaroni and cheese topped with beef brisket.

Grand opening specials, offered the first four weeks after opening, will include Philanthropic Fridays, when uniformed first responders receive 50 percent off their meals; and Singer-Songwriter Saturdays, when live music is featured. Three guests also will win free barbecue for a year.

Specials throughout the year will include children eating free on Sundays (with one adult meal purchase totaling $10 or more) and 10 percent off purchases for customers in uniform, including military members and Boy Scouts.

In Stroudsburg, Lynch and his wife, Kathleen, regularly donate chicken, turkey, sausage, baked potatoes and other food leftover at the end of the day — totaling about 2,000 pounds a year — to the Monroe County Homeless Initiative. At the Palmer restaurant, the couple intends to partner with Safe Harbor Easton.

Other area Dickey’s are in Bethlehem and Lower Macungie Township.

Adobo and Dickey's will join the shopping center's other new addition, Wingstop, which opened in January in the space that previously housed Maryland Fried Chicken.

Operated by Yogesh Patel, Palmer's Wingstop serves traditional and boneless wings as well as strips — all sauced and tossed in 11 original flavors, including fan favorites such as Mango Habanero, Garlic Parmesan and Original Hot.

Hours are 11 a.m. to midnight everyday. 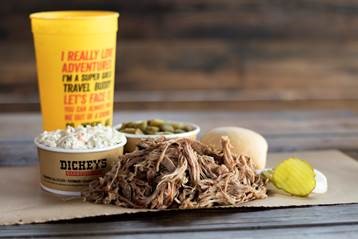