Dickey’s has 538 national locations and has been ranked as one the fastest-growing franchises in the country. He talks about the company’s evolution and its legacy as one of Dallas’ oldest family-owned brands.


What steps is Dickey’s taking to stay relevant among its competitors?
We always look at our business, where are we doing (well), and where do we need to improve. We came out with (a new restaurant) prototype in 2015 after a half a decade worth of notes. We (wanted to) eliminate wasted space — you have to air condition it, heat it, insure it and obviously pay rent on it. We found we had excess space in our kitchens, so we streamlined those.

We also got rid of a lot of non-core food items that were not selling quite as well, that we weren’t as passionate about and we weren’t the very best at. What it came down to was seven meats, seven vegetables, chips, a couple of desserts and drinks. Later this year we’ll be rolling out direct delivery from the stores. People want food these days how they want it, when they want it, where they want it, so we’ve got to be omnichannel about the ways we deliver food and make sure that food is great.


What are the company’s growth plans and new initiatives for this year?
Our biggest growth year was in 2014 when we opened 122 stores. This year, we are looking to top that with roughly 125 to 135 store openings. They will be all franchised in a mix of new and existing markets across the U.S. We’ll surpass the 600-store milestone this year, and then we’ll go international either this year or next year. South Korea and the Philippines are two places that we’ve targeted. We’ve also had a lot of interest in Mexico and some in Central and South America.

We want to cut our carbon footprint down dramatically. Our barbecue pit uses 80 percent less wood than our traditional pits did, and the wood is sustainably sourced. By the end of this year, all of our packaging will be completely recycled. Our stores that we’re building now don’t use any gas, and they use significantly less electricity than they used to. We’re on a journey right now to cut sodium nitrate and sodium nitrite out of our sausage and we’re working on making all of our meats in the next couple of years all natural and antibiotic-free. We’re also in the process of taking a lot of the complicated ingredients with lots of syllables out of our vegetables.


Would Dickey’s ever consider a private equity partnership or stock offering?
(We are going to stay) a private family brand. We’re not thinking about anything like going public or getting into private equity. We don’t want to get partnered up with financial people. We are restaurateurs, and we don’t want Wall Street people telling us how to make great brisket. 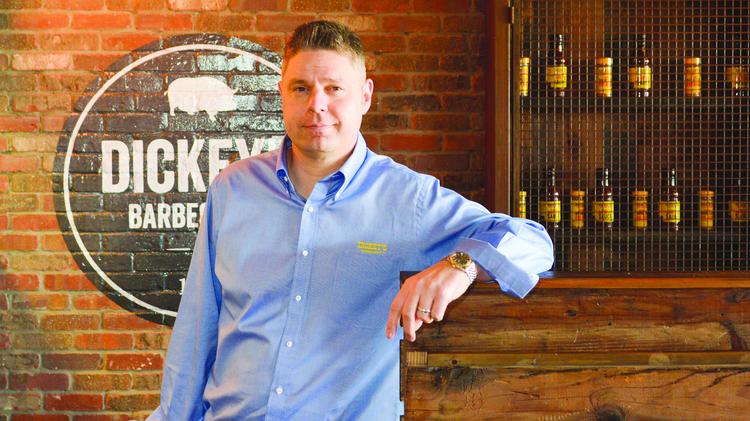