Finding work as an Ex-Felon

ROCKFORD, Ill. (WIFR) -- In a world where it can sometimes be hard finding a helping hand, a local business owner is proving that you can always find the good in someone.

At 24 years old, Dylan Opinker has his whole life ahead of him.

"I am very social, I like to get out and have fun and play sports and work and take care of my family," says Opinker.

Throughout the years, Opinker has come to learn that working wouldn't come so easily as a felon.

"I was young and dumb as I would say, when I was 18 years old I caught a theft charge doing some things with friends that now I think I really wouldn't have done," says Opinker.

While filling out applications, he would realize checking a box would determine his fate.

"I put in many apps, I'm talking probably over 30 or 40 applications and I just kept getting denied and it kind of made me feel like I had no hope," says Opinker.

That changed once he met Ryan, owner of Dickey's BBQ in Rockford.

"We were just talking about a lot of people having trouble getting accepted at other places," says Ryan McPeek, owner of Dickey's Barbecue Pit.

McPeek decided to become a business that gives these men and women a second chance.

Dickey's isn't only known for its BBQ since opening in 2015 they've opened the doors for more than 10 ex-felons.

"I know people have a history, but people can change and they can't change if they aren't given a chance," says McPeek.

Opinker is one of those ex-felons given a chance.

"Ryan being the good guy he is, called me and offered me this job and I couldn't be more thankful," says Opinker.

"We still have to believe that they are willing to make that change," says McPeek.

Little did Opinker know, his old ways would eventually come back to haunt him.

"I was working here and got into a little bit of trouble and had to go do some jail," says Opinker. "He called and I thought he wanted my t-shirts back."

Instead of calling to get his uniform back, McPeek was calling to give Opinker his job back.

"This is a first time for us that we rehired somebody that we thought would straighten out," says McPeek. "If you got all these people in Rockford looking for work and nobody will give them a chance, it's a tough spot."

While Dickey's is a small staff, McPeek says he hopes other businesses in the Stateline will jump on board to end the stigma of hiring ex-felons.

"Things happen and people make mistakes so now I've just owned up to it and I do what I have to do and getting my life together."

While Dickey's is currently not hiring, when asked if there was anyone McPeek wouldn't hire, he says they haven't run across anyone they weren't willing to give a chance.

McPeek says many of his employees have gone on to get better jobs because of the opportunity they got with Dickey's. 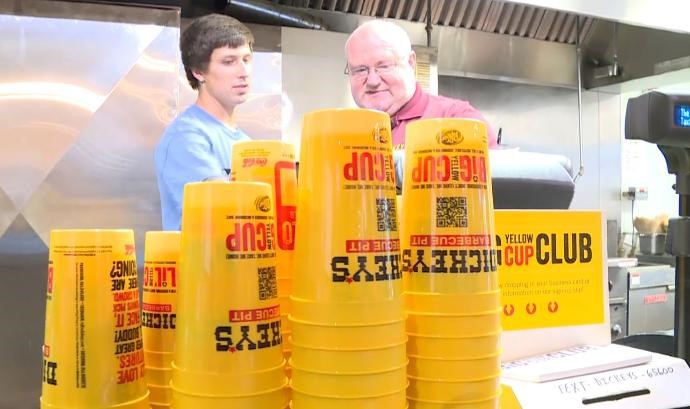