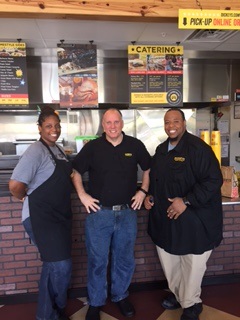 In the land of Disney, barbecue is hard to come by. Until Patrick Bradford and his business partner, Cameron Steinagel, came along, the city of Orlando was devoid of a Dickey’s Barbecue Pit.

Having had a long career in chain restaurants, Patrick decided it was time to be his own boss. After looking at his options, he chose to open a Dickey’s Barbecue Pit because of the hometown ‘fast casual’ feel as well as the great support that Dickey’s offers its franchisees. From the start, he received guidance and a wealth of information from his franchise director, Kim Juda. He says, “A lot of what I’m doing is new to me, so it’s important that I have the right resources to help me. Kim is quick to respond to questions and concerns, and is proactive with her support.”

Patrick is now thriving in the barbecue business. He loves interacting with the community and working for himself. But the best part for him is working the pit. He takes particular pride in the slow smoked goodness of quality, fresh meats.

When he’s not slow smoking meat, Patrick can be seen supporting his local elementary schools. To celebrate the start of the new school semester, the store hosted a pulled pork sandwich eating contest between the principals of several local elementary schools. The event raised money for all the schools, and the winning principal won free catering for the school staff.

Currently, Patrick owns two Dickey’s stores and is planning to open three more in the Orlando area. With the community support he has already received, he needs not ‘wish upon a star’ to become an even more successful owner/operator.