DALLAS (July 14, 2020) – Dickey’s Barbecue Pit is commemorating those who protect and serve communities across the nation with the launch of its new First Responder Tribute Cups.

From July 15 through Sept. 30, the world’s largest barbecue concept will offer a 32-ounce limited-edition collectible Big Yellow Cup. A portion of the proceeds from every cup sold will be donated to The Dickey Foundation, which provides safety equipment such as helmets, shields, respiratory masks and overall support for local first responders.

In addition to offering First Responder Tribute Cups, from Aug. 1 through Sept. 8, the Texas-style barbecue brand will host the Dickey’s Community Heroes Campaign. To enter, participants can post a photo of a difference maker from their community on their personal Facebook or Instagram profile, say why they nominated them, use hashtags #MyHero and #DickeysBarbecuePit and follow and tag Dickey’s Facebook or Instagram page and the nominee.

One lucky grand prize winner will receive free barbecue for a year! Four additional winners will have $500 donated to the charity of their choice.

“Dickey’s Barbecue Pit and The Dickey Foundation are proud supporters of our local heroes,” said Laura Rea Dickey, CEO of Dickey’s Barbecue Restaurants, Inc. “Dickey’s Big Yellow Cup is iconic, just like first responders are icons in our communities. We look forward to honoring those that work to keep us safe through our First Responder Tribute Cups and Community Heroes Campaign.”

In 1988, Roland Dickey Jr. wanted fans to take home a Dickey’s souvenir that would be both useful and environmentally conscious. He created Dickey’s original Big Yellow Cup, which has since become a special pantry staple for guests all over the world. Over the years, guests started sending in photos of how they use their Big Yellow Cups, and it quickly became a tradition to take and send in photos of their cups’ travels. The iconic Big Yellow Cup is now recognized all over pop culture, recently making its appearance in the Netflix series Tiger King. 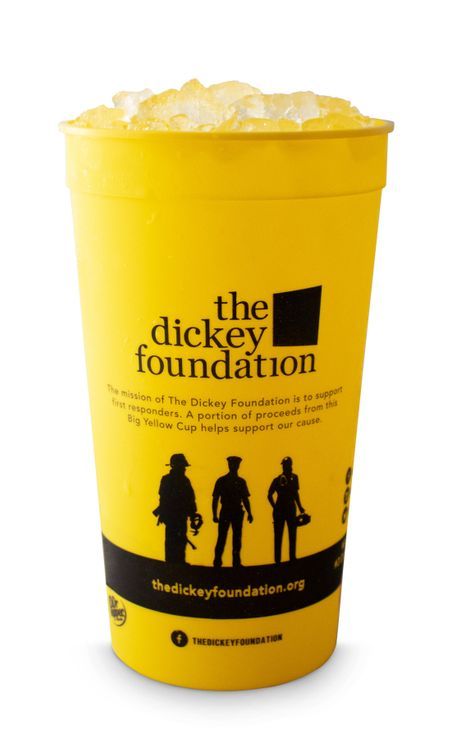