Dickey's Honors our Military and offers Specials on Barbecue Packs

DALLAS (May 26, 2021) – Dickey’s Barbecue Pit is kicking off the unofficial start of summer with special discounts on Dickey’s Packs in honor of Memorial Day.

Whether having a picnic for two, a family reunion or a summer bash, Dickey’s pit-smoked barbecue compliments any gathering, big or small. The world’s largest barbecue concept is now offering $5 off any Dickey’s Pack with code 5OffPacks in-store or online www.dickeys.com for a limited time. Dickey’s Pack options include the Picnic Pack for two, the Family Pack for four, the XL Pack for eight and the Party Pack for 12. Each Pack includes your favorite meat, choice of sides, rolls and barbecue sauce.

“Dickey’s is proud to partner with U.S. military veterans, and we have worked to create benefits that help these valued service members go into business for themselves,” said Laura Rea Dickey, CEO of Dickey’s Barbecue Restaurants, Inc. “Memorial Day isn’t about barbecue, it’s about taking time to remember those that gave the ultimate sacrifice to protect our freedoms. This is our small way to make it easier for families to gather around a meal and spend more time together.”

Guests have the option of ordering their Pack via online ordering at dickeys.com, through the Dickey’s App or calling their local Dickey’s Barbecue Pit. Guests can also order their Dickey’s Pack for delivery at participating locations, so they never have to interrupt their summer fun.

About Dickey’s Barbecue Restaurants, Inc. Dickey's Barbecue Restaurants, Inc., the world’s largest barbecue concept, was founded in 1941 by Travis Dickey. For the past 80 years, Dickey’s Barbecue Pit has served millions of guests Legit. Texas. Barbecue.™ At Dickey’s, all our barbecued meats are smoked onsite in a hickory wood burning pit. Dickey’s proudly believes there’s no shortcut to true barbecue and it’s why they never say bbq. The Dallas-based, family-run barbecue franchise offers several slow-smoked meats and wholesome sides with 'No B.S. (Bad Stuff)' included. The fast-casual concept has expanded worldwide with three international locations in the UAE, Singapore and Tokyo and operates over 550 locations in 44 states. In 2016, Dickey’s won first place on Fast Casual’s “Top 100 Movers and Shakers” list and was named a Top 500 Franchise by Entrepreneur in 2018. Dickey's Barbecue Pit has also been recognized by Fox News, Franchise Times, The Wall Street Journal, QSR Magazine, Forbes Magazine and Nation’s Restaurant News. For more information, visit www.dickeys.com. 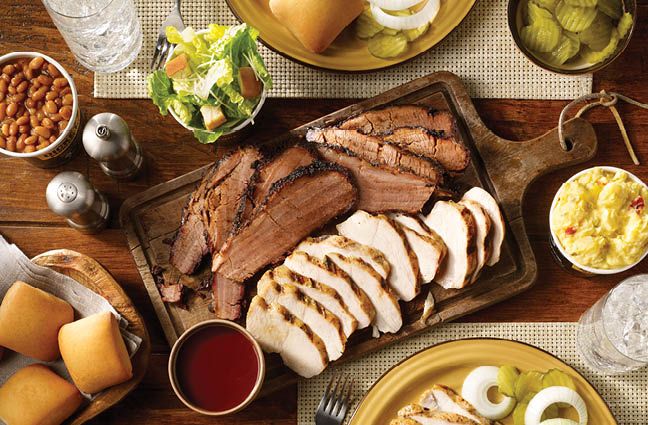