Kids Eat Free at every Dickey’s location this February 14

(Dallas, TX) A recent study found that 60 percent of Americans that celebrate Valentine’s Day include their entire families in the celebration. Dickey’s Barbecue Pit Owner/Operator Muhammed Afzal will offer Kids Eat Free this Valentine’s Day to help those families celebrate with great food at a reasonable price.

Afzal, one of Dickey’s original franchisees, is now the proud owner of five Dickey’s locations across the north Texas area, acquiring his fifth location in Plano, TX in 2015.  Operating these five locations over the years, Afzal has learned that family comes first to his guests.

“In my 22 years with Dickey’s Barbecue Pit, I have met and worked with a diverse group of Owner/Operators all with different stories and backgrounds,” says Afzal. “The one thing that brings us all together is that we have a passion for pit-smoked barbecue and serving our guests and their families.”

Dickey’s has nearly 600 franchised locations nationwide and considers their barbecue business model as family working with family to serve families.  Still family-owned and operated, Dickey’s Barbecue Pit is proud to count their two original franchisees among their growing brand 22 years after Dale Smith and ‘Mo’ Afzal opened their first locations.  Since 1994 the Afzal and Smith families have had a healthy family rivalry between the two which will continue this Valentine’s Day to see who will host the most families for their pit-smoked family meal.

“At Dickey’s, we constantly try to evolve to better ourselves while staying true to our barbecue and family roots,” says Laura Rea Dickey, CEO of Dickey’s Barbecue Restaurants, Inc. “This Valentine’s Day, Dickey’s hopes folks will see barbecue as the best way to their favorite peoples’ hearts.”

To learn more about joining the Dickey’s Barbecue Pit family go to www.dickeys.com/franchise or call 866-340-6188.

About Dickey’s Barbecue Restaurants, Inc.
Dickey’s Barbecue Restaurants, Inc., the nation’s largest barbecue chain was founded in 1941 by Travis Dickey with the goal of authentic, slow-smoked barbecue. All meats are still slow smoked on-site in each restaurant which is why at Dickey's, “We Speak Barbecue.” The Dallas-based family-run barbecue franchise offers a quality selection of signature meats, savory sides, tangy barbecue sauce and free kids’ meals every Sunday. The brand has expanded to 600 locations in 44 states. In 2016, Dickey’s won first place on Fast Casual’s “Top 100 Movers and Shakers” and ranked in the top ten of Franchise Times’ “Fast and Serious.” Dickey’s Barbecue Pit was recognized for the third year by Nation’s Restaurant News as a “Top 10 Growth Chain” and by Technomic as the “Fastest-growing restaurant chain in the country.” For more information, visit www.dickeys.com or for barbecue franchise opportunities call 866.340.6188. 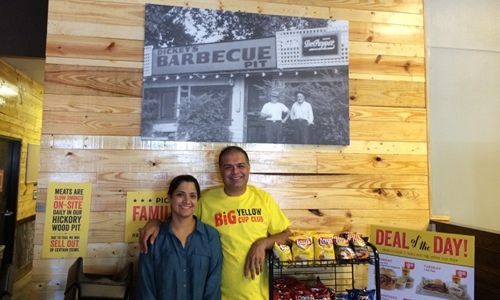