A portion of the proceeds from every Tribute Cup sold in October will be donated toward providing first responders with mammography screenings and other breast cancer detection services through The Dickey Foundation.

DALLAS (Sept. 29, 2020) – Dickey’s Barbecue Pit is joining the fight against breast cancer this October with the debut of its first limited-edition Pink Big Yellow Cup.

In honor of Breast Cancer Awareness Month in October, the world’s largest barbecue concept’s signature Big Yellow Cup will become pink. Throughout the month, Dickey’s will offer the 32-ounce limited-edition collectible Tribute Cup for purchase in all of their locations across the U.S

A portion of the proceeds from every charitable cup sold will be donated to The Dickey Foundation, which provides safety equipment and overall support for first responders. The Dickey Foundation will use the funds raised from the collectible Pink Big Yellow Cup to provide mammograms and other breast cancer detection, treatment and services for local first responders.

“Breast cancer is the most common cancer diagnosed among U.S. women and the second leading cause of death,” said Laura Rea Dickey, CEO of Dickey’s Barbecue Restaurants, Inc. “One in eight women will be diagnosed in their lifetime, and early detection is key to increasing survival rates. As the nation’s largest barbecue brand, Dickey’s is proud to support our local first responders in the battle against breast cancer.” 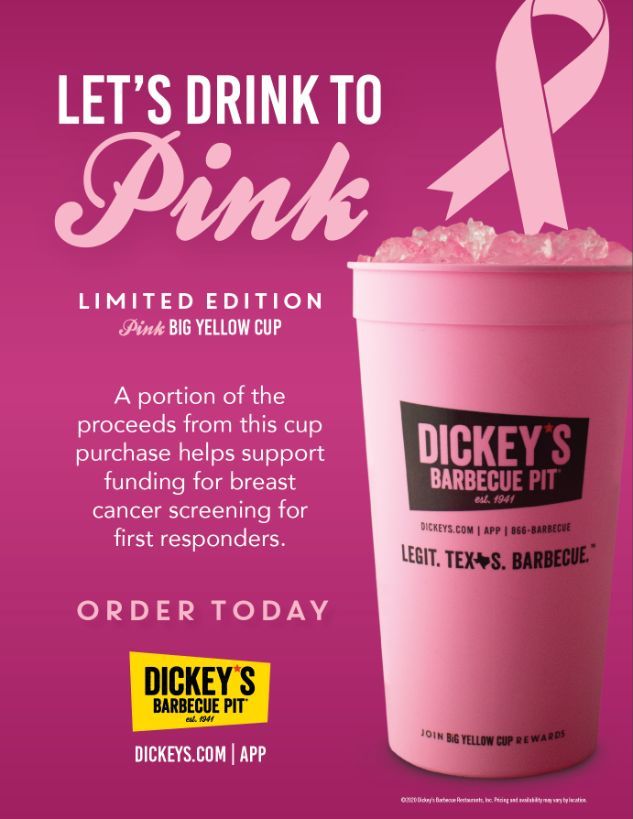