Enter to win by watching for the “Heck of the Day” during the syndicated sitcom, “The Middle”

To enter, tune in to “The Middle,” airing in syndication Monday through Friday, now through February 3 and watch for the “Heck of the Day” and text it to 34490 or enter at themiddleweeknights.com. No purchase or payment is necessary to enter or win a prize. Applicants must be 21 years of age or older. The deadline to enter is 11:59 p.m. on Friday, February 3. Local programming and additional contest rules are available here.  150 runner ups will also receive a Dickey’s Barbecue Pit “Family Pack,” the perfect option for family get-togethers.

“Dickey’s Barbecue Pit is proud to serve busy families nationwide, and we are excited to offer this sweepstakes for a fun family getaway,” says Emily Bennett, Vice President of Marketing at Dickey’s. “We appreciate collaborating with Warner Bros. Television and look forward to more partnerships in the future.”

To find the Dickey’s Barbecue Pit nearest you, click here.  Go to TheMiddleWeeknights.com to see when it’s on in your hometown.

About Dickey’s Barbecue Restaurants, Inc.
Dickey’s Barbecue Restaurants, Inc., the nation’s largest barbecue chain was founded in 1941 by Travis Dickey with the goal of authentic slow-smoked barbecue. With locally owned and operated franchises nationwide, all meats are still slow smoked on-site in each restaurant. The Dallas-based family-run barbecue franchise offers a quality selection of signature meats, savory sides, tangy barbecue sauce and free kids’ meals every Sunday. The fast-casual concept has expanded to 600 locations in 44 states. In 2016, Dickey’s won first place on Fast Casual’s “Top 100 Movers and Shakers” and ranked in the top ten of Franchise Times’ “Fast and Serious.” For more information, visit www.dickeys.com or for barbecue franchise opportunities call 866.340.6188.

Emmy® winner Patricia Heaton stars in The Middle, a warm and witty single-camera comedy about raising a family and lowering your expectations. Middle-aged, middle class and living in the middle of the country, Frankie Heck (Heaton) is a harried wife and working mother of three who uses her wry wit and sense of humor to try to get her family through each day intact. Her unflappable husband, Mike (Neil Flynn), is a manager at the local quarry and her sardonic partner in the daily grind that is raising their average – yes, most definitely average – family. The show also stars Charlie McDermott, Eden Sher, and Atticus Shaffer.

The Middle is a half-hour comedy series filmed at Warner Bros. Studios in Hollywood, California. The show was created by Eileen Heisler and DeAnn Heline. It is produced by Blackie and Blondie Productions in association with Warner Bros. Television. 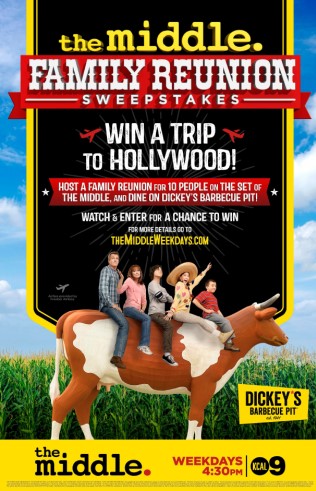